The Old St. Mary’s Catholic Church at Lake Church looks much the same from the outside, but the inside has undergone a massive change since last fall.

Owner Dan Majewski converted the church, which was built in 1884, into a modern single-family home that hit the market with a list price of $699,900 on Thursday, June 2.

The decorative painting on the ceiling and the wall where the altar once stood, as well as the symbol of the Ave Maria, remain.

“I try to keep as much as possible here,” Majewski said. “It’s the character of the building.

Majewski’s efforts have not gone unnoticed.

City President Tom Winker said at Monday’s board meeting, “It’s absolutely beautiful in there. Absolutely stunning. Just to have that kind of vision of what he had for that, it’s amazing.

And, he noted, the building is now back on the tax rolls. 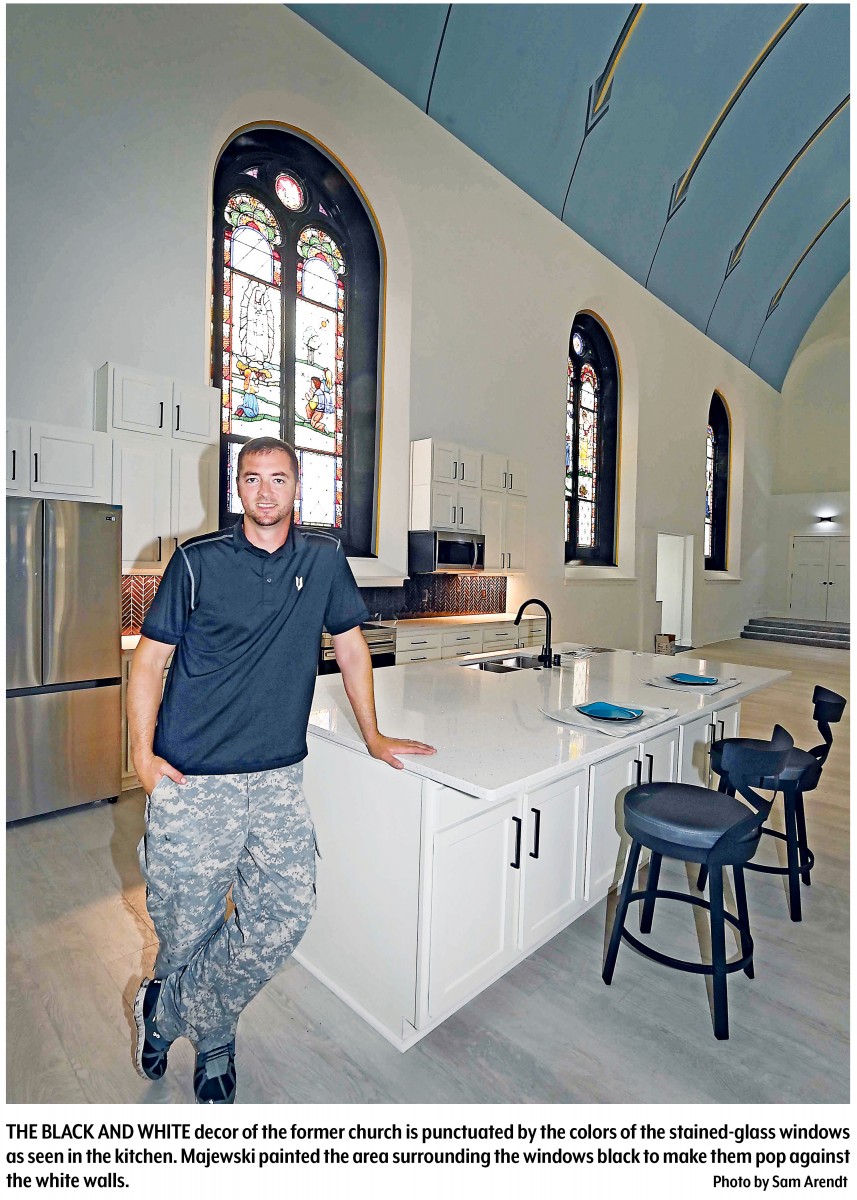 Majewski said a number of people stopped by during the months he worked on the old church building, eager to take a look at the changes.

He told Winker he would hold an open house so people could check out the renovations, but no date has yet been set.

“It probably won’t happen for a few weeks,” Majewski said.

He is still working on the finishing touches to the building and its attached new three-car garage, which remains under construction on the north side of the church.

“It’s still a bit of a work in progress,” Majewski said. “I don’t think people will quite have the vision until it’s all done.”

St. Mary’s Church closed in August 2018 and the building went on the market last fall.

Majewski, who is a licensed contractor and real estate agent, said he jumped at the chance to renovate the building.

This is the second church he has converted into a single-family home.

“That may be my niche market,” he said.

The church is the seventh property he has returned and the second church. The first, in Big Bend, is Majewski’s house.

During the pandemic, he said, he was looking for homes to flip but found the market limited.

After establishing his home, he was thrilled to purchase another church.

And it seems the St. Mary’s building was natural for Majewski, given that he, like so many others in Belgium, has roots in Luxembourg.

But first, he gave the parish a chance to remove pews, altars, and whatever else they wanted.

Majewski quickly settled on an open concept for the home, noting that it’s much easier to do so in a building like an old church instead of a residence.

“A church is structurally sound,” he said, unlike a house where you may need to shore up the structure to open up the walls.

A long, 14-foot-high wall was built along the south side of the nave to create enclosed spaces for four of the five bedrooms and two bathrooms.

Although the wall does not reach the ceiling, it separates the spaces.

On the north side of the building, opposite the wall, is the large room, which offers plenty of space for the modern kitchen, dining room and living area.

The choir offers a sitting area and leads to the master suite. The master bedroom measures 400 sq.

There is also 200 square feet of storage above the walk-in closet. 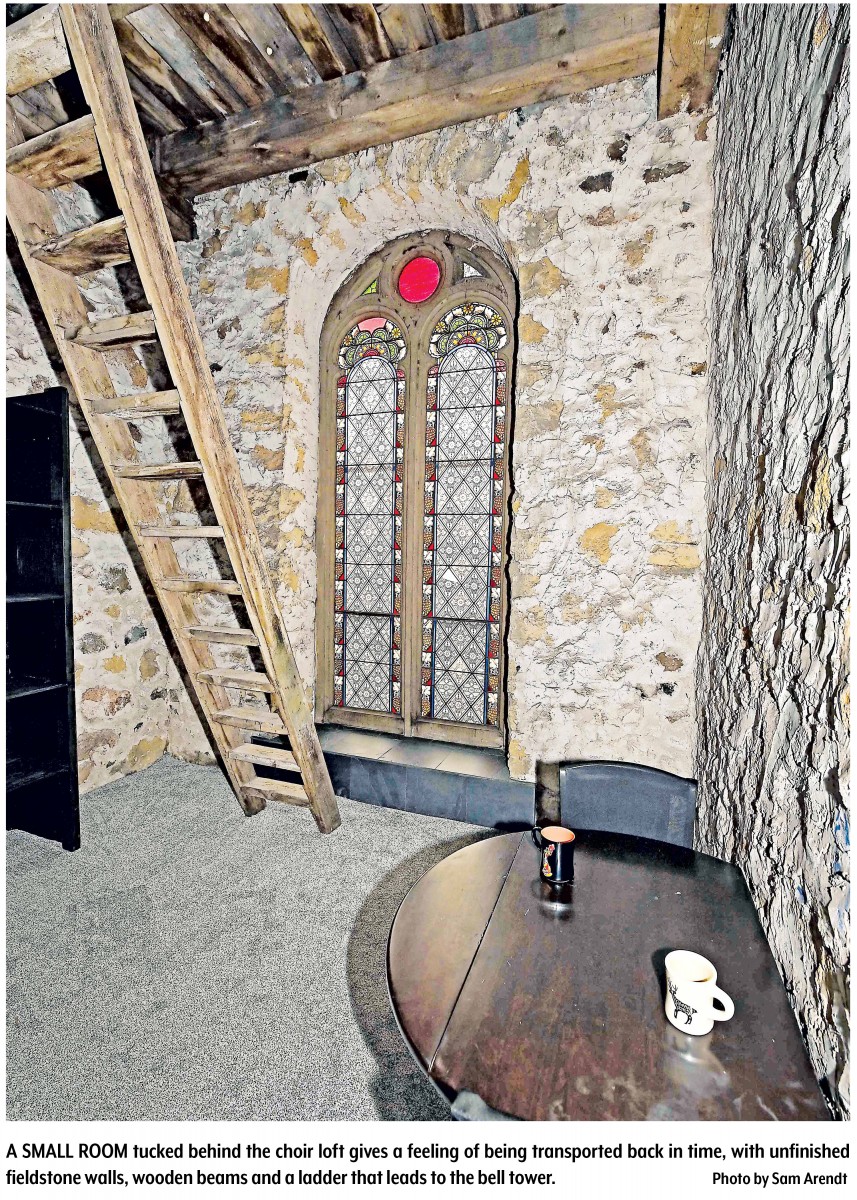 The confessionals remain, one transformed into a pantry in the kitchen and the other into a dressing room in a bedroom.

The choir loft at the west end of the building remains, overlooking the living areas of the house.

Hidden behind a wall is a narrow passage that leads to “Narnia,” Majewski said, walking to a small room with fieldstone walls and a majestic stained glass window equipped with a coffee maker and a small table and chairs. . A ladder leads to the bell tower.

The home has a modern vibe with its black-and-white color scheme, but the 5-by-12-foot stained glass windows and decoratively painted ceiling provide pops of color.

Majewski added acoustic panels to prevent some of the sound from bouncing along the 36-foot-tall ceilings, an effort that will be reinforced once the home is furnished.

And while some may look at the high ceilings and think of the high heating bills, Majewski said the gas bill went down significantly when he replaced the boiler system with two efficient heaters and air conditioners.

Electrical and plumbing systems are also new, he noted.

“Everything is new here,” he said.

He is working on landscaping the property, installing a five-foot-wide stone and boulder barrier against Highway D, as well as a grassy area.

Home, he says, isn’t for everyone, but it doesn’t have to be.

“It’s going to take a specific family, a specific person,” Majewski said. “It should appeal to a large family.

“If you want a big enough, brand new house on 1 1/2 acres near Lake Michigan, this could be it.”