The Episcopal Church hosted a webinar on Sept. 15 to highlight the success of Sacred Ground, a program for small-group discussions about the history of racism in the United States.

[Episcopal News Service] The Episcopal Church’s Sacred Ground program, developed and launched in February 2019, has been a resounding success, measured by the program’s widespread adoption as part of the church’s efforts to promote racial reconciliation and healing. More than 2,300 small discussion groups, or “circles,” have registered so far to host the 10-part discussion series, with more to begin this fall.

On September 15, participants in some of these Sacred Grounds circles and other Episcopalians interested in starting their own circles attended a webinar kicking off the latest round of Sacred Ground discussions. More than 1,300 people attended the webinar, underscoring the continued relevance of the program and its broad resonance throughout the church.

Presiding Bishop Michael Curry, in his opening address, called himself a “cheerleader for Sacred Ground” and said he was encouraged by the way Episcopalians reminded him of Sacred Ground wherever he traveled . “I can’t think of anything like that impacting the church and the people in the church,” Curry said. “It’s just remarkable, and I thank God for that and I thank God for you.”

The church developed the program as a resource primarily for white Episcopalians to learn more about the history of racism in the United States and how racism continues to manifest itself today in social interactions and institutions. Americans, including churches, even when the people involved are not themselves. racist. The church also invites people of color to participate in Sacred Ground circles, but cautions that they should not feel pressured to explain the experience of racism to their white neighbors.

“Sacred Ground has provided us with an accessible way to engage in difficult conversations about race and, by implication and logic, a whole host of our human and structural relationships that are hard to talk about,” Curry said. 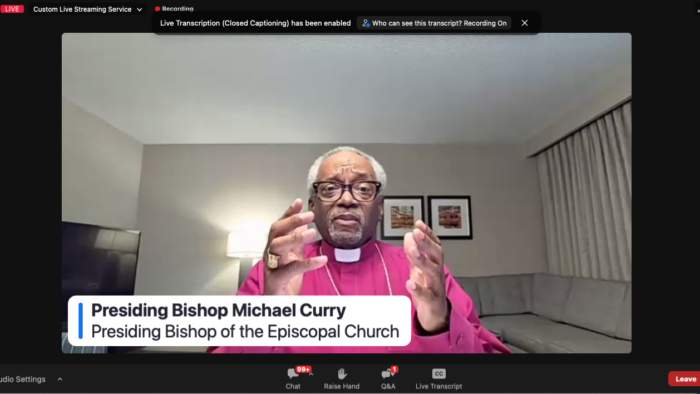 The September 15 webinar also included panel discussions with Episcopal leaders who shared their stories of helping facilitate Sacred Ground Circles. Ginny Woodruff, a lay leader in the Diocese of East Carolina, identified the reluctance of some people in her diocese to allow discussion of racism to veer into partisan politics. Those who participated were reassured.

“This is about education, not politics,” Woodruff said. “Partisan politics had no place in this conversation. Granted, everything in our world is politicized these days, but we can steer it away from partisan politics. This is our real story that most of us don’t know. It’s about hearing the other side.

Sacred Ground is built around an online program of documentary films and readings that focus on Indigenous, Black, Latino, and Asian/Peaceful American histories that intersect with European American histories. Participants also examine examples of systemic racism in America today, such as mass incarceration and its disproportionate effect on people of color.

Although launched in 2019, church-wide participation accelerated significantly following the May 2020 murder of George Floyd, as racial justice issues moved to the forefront of public discourse. The increase in online meetings at the start of the pandemic also created opportunities for Sacred Ground circles to come together more easily online.

Some congregations have formed Sacred Ground circles for their own interested members. Other circles have been organized at the diocesan level, often as part of larger efforts to participate in Becoming Beloved Community, the Episcopal Church’s core race reconciliation initiative.

In November 2021, clergy in Brunswick, Georgia launched two Sacred Ground circles to learn and speak about racism amid ongoing tensions in their community following the February 2020 murder of black jogger Ahmaud Arbery by three white vigilantes. And last February, a group of eight Episcopal bishops embarked on a pilgrimage to civil rights monuments in Alabama following the bishops’ Sacred Ground sessions.

The church continues to emphasize Sacred Ground as a key resource for Becoming Beloved Community, the framework the church launched in 2017 to help congregations and dioceses engage with race as an issue. spiritual and social. Becoming a Beloved Community, invoking a term popularized by the Reverend Martin Luther King Jr., has four parts: telling the truth about church and race; proclaim the dream of beloved Community; practice the way of love on the model of Jesus; and repair the breach in society, for example through advocacy for reform.

Sacred Ground is not intended as a complete history of racism, but rather as a starting point for discussion as participants relate historical narratives to their own life experiences. Unlike other anti-racism programs, it does not require an experienced trainer, only volunteer facilitators. Participants prepare before the meeting by viewing one or more videos and completing reading assignments, including the program’s two core books: “Waking Up White,” a 2014 memoir by Debby Irving, and “Jesus and the Disinherited” by black theologian Howard Thurman, originally published in 1949.

“I strongly believe that education is the key to eliminating racism and then pursuing racial justice,” said Lesley Dean, a lay leader who has helped coordinate the Nebraska Diocese’s growing efforts to engage its congregations in Sacred Ground. .

And while the program doesn’t prescribe specific real-world responses, it assumes that participants will be drawn to working for social change in their own ways when they’re done.

“These small groups can also become spaces of accountability where we challenge each other, and where we finally take action and do things together that I couldn’t have done on my own,” said the Reverend Stephanie Spellers, Canon of the Presiding Bishop for Evangelism, Reconciliation and Care of Creation, said during the webinar. 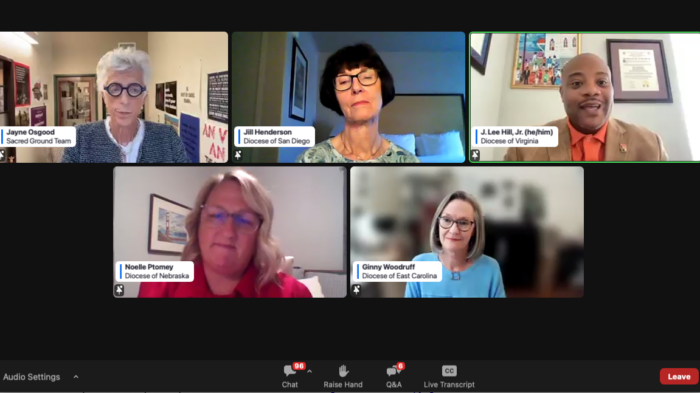 Panelists discuss the Episcopal Church’s Sacred Ground program during a September 15 webinar to kick off the fall round of new Sacred Ground circles.

In the Diocese of San Diego, more than 650 people participated in Sacred Ground in 16 parishes, according to Jill Henderson, who led some of those efforts. The diocese is also piloting an extension of the program beyond the initial 10 sessions, with additional materials to give participants guidance on how to put what they have learned into practice.

“I think you have to give people the opportunity to take action,” Henderson said. “You really have to get people to action.”

The Rev. J. Lee Hill Jr., Virginia Diocese Missionary for Racial Justice and Healing, said Sacred Ground attendees who are thinking about what to do next could volunteer to lead the next Sacred Circle. Ground in their congregations or communities. Sharing what they have learned is one way to act.

“It becomes this job of opening up a new space of creating new opportunities for people to engage in a different way,” Hill said. “You don’t have to be an expert, just be a guide and want to walk side by side throughout the journey.”

– David Paulsen is an editor and reporter for Episcopal News Service. He can be reached at [email protected].