Two proposals are presented for areas known as plots 8 and 8A on the old I-195 corridor in Providence – plots that adjoin one of the largest and most architecturally significant churches in the city .

One of the plans is offered by Churchill & Banks – the development company owned by Richard Baccari and his son Richard, Jr.

Le Baccari senior is perhaps best known as one of the main developers of Stop & Shop developments.

The Baccaris are major political donors, having given more than $86,000 almost exclusively to top Democrats. In the past two years alone, the two have donated thousands of dollars to Providence mayoral candidate Brett Smiley, Governor Dan McKee, Senate Speaker Dominick Ruggerio and President Joe Shekarchi.

Churchill & Banks submitted a proposal for 10-story apartments and condos, five full stories higher than any building in the area.

On one side of the proposed development is the historic “Our Lady of the Holy Rosary” Church – the center of the Portuguese Catholic community in Fox Point, a neighborhood undergoing gentrification at near record rates. 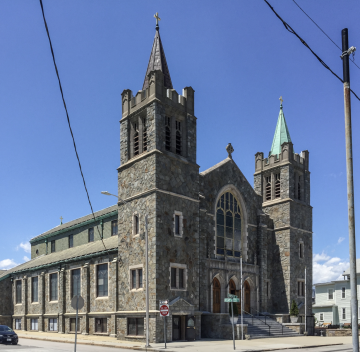 Our Lady of the Rosary from Fox Point PHOTO: Kenneth Zirkel CC: 2.0

The other package proposal was submitted by D+P and Truth Box.

“The FPNA first heard about it at a joint meeting with the JDA last Tuesday, which was a last minute agenda item. The developments in 195 district land at Fox Point are among the main elements on which we have been active in recent years, and we will be active on this project”, Cicchitelli.

JDA’s Sharon Steele says the group has “not had a chance” to review the newly released plans. 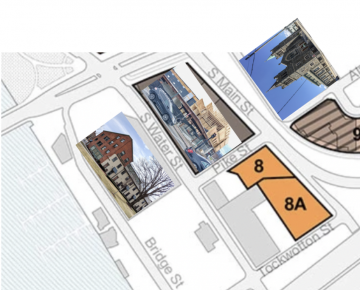 Includes images by: ArtsIn Ruin, K. Zirkel and Will Morgan

Will Morgan, GoLocal architecture critic and author of more than a dozen books, weighed in on the proposals.

“The ZDS proposal for plots 8 and 8A is not impressive. There’s little recognition from its neighbors or the neighborhood, particularly the Gothic-style Portuguese church it overwhelms, let alone its strategic harborside location,” Morgan said. of design speaks of College Hill, Wickenden Street, Corliss Landing, Bill Warner’s Blue Bridge, the River?

“Who wouldn’t want an apartment with a view of the harbour, the head of Narragansett Bay? But only one side of the large cube takes this view into account. Surely there could be an adventurous solution to designing this building so that there are more views – not to mention the excitement. Instead, we are presented with a cube, filled with the required number of apartments, plus balconies. Instead of an innovative design, this block looks like an airport motel,” adds Morgan.

“In trying to join the two plots, the designers executed a gradual scheme, where three floors morph into four, then a five-story atrium, then the ten-story apartment box. Rather than toning down the ten-story mass, this stair-like solution is simply awkward, even emphasizing how inappropriate this urban intruder is,” Morgan said.

“The commercial lower section, with its large windows, is reminiscent of 19th century factories, but without their character. The light may be welcome, but the design is rather bland, as if the architects had only filled in the room. “building envelope. An opportunity to do some remarkable, perhaps historic, architectural work, something that would say positive things about Providence, was missed here,” Morgan added.

Morgan is more favorable to the design proposed by D+P and Truth Box.

“Much better developers/architects, because they put in the effort. They have a good track record and have actually done some exciting, decent buildings,” Morgan said.

Morgan expressed concern about even more development in the already swollen area that is the only route to the on-ramp for 195 East.

“Pike Street is barely big enough to handle deliveries for Trader Joe’s [which is still being constructed]”Morgan said.

Commission 195 will consider the proposals at its meeting scheduled for June 22.