The first Welsh-language Bible and a Pre-Raphaelite work of art are among the treasures from the cathedrals of Wales featured in a new book.

The stories of 50 remarkable artifacts, held by the cathedrals of the Church of Wales and the Church of England, are contained in the book, titled Deans’ Choice: Treasures from the Cathedrals of England and Wales. Each treasure has been chosen and described by the Dean or senior clergy of the cathedral presented and the book has been compiled by Janet Gough, Canon of Saint Deiniol Cathedral, Bangor.

The first Welsh Bible, which dates from 1588, and the memorial to its translators were chosen by St Asaph’s Cathedral. Meanwhile, Rossetti’s triptych The Seed of David – a Pre-Raphaelite oil painting – was chosen by Llandaff Cathedral and it is the central panel of this painting that features as the book’s cover image.

The other Welsh treasures chosen are:

The Dean of St Davids, Dr Sarah Rowland Jones, said: “Wales is richly blessed with an abundance of treasures in her churches and especially in her cathedrals. Many have been cherished and preserved over the centuries by past generations and have become part of our sense of culture and identity. Often the building itself which is the treasure.

“It was quite a task to choose one or two treasures from each of the six cathedrals of Wales to include in this magnificent and fascinating book, but we hope that those we have chosen will give the reader an insight into the religious heritage of Wales and perhaps they will whet their desire to visit and discover more.

The Under Dean of Saint Deiniol’s Cathedral, Canon Sion Rhys Evans, says: “Janet Gough made history last year by becoming one of the first lay canons of Saint Deiniol’s Cathedral. This year, in compiling this beautiful and important book, she has put the cathedrals of Wales on the map, showcasing our wonderful Welsh treasures alongside better-known English examples. We are very grateful to Janet for her work, here in Bangor and now across Wales, to share the glories of our cathedrals with a wider audience.

Introducing the book, Janet Gough, who is a lecturer and advisor on historic churches and cathedrals, said: “Covering so many different crafts and skills over a period of over 1,000 years, the book pays homage to generations of craftsmen responsible for creating and maintaining cathedrals as we know them today – including the thousands of sewn kneelers, mostly by women.

“The 50 treasures also testify to centuries of Christianity and the cathedrals are places of worship magnified by artistic expression – here in the rood screens, crosses and liturgical objects.

“The history and architecture of our cathedrals have been documented and described in many ways by many people over the years in books of all shapes and sizes. But here their stories are revealed again, through object special by double page, and in the voice of the dean of the cathedral who cherishes it. 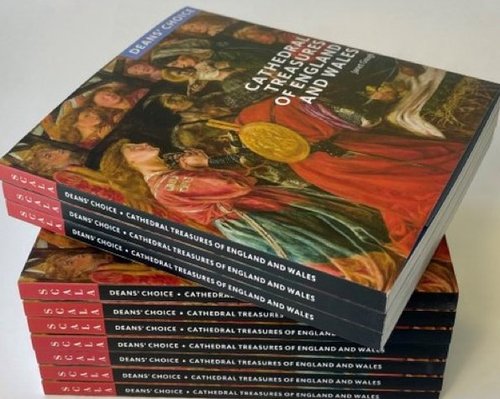 The Translators’ Memorial, unveiled in 1892 outside the cathedral, marks the 300th anniversary of the 1588 translation of the Bible into Welsh. It celebrates eight men, most from Denbighshire and Conwy, whose pioneering work may have helped save the Welsh language. Among them was Bishop William Morgan (1545-1604), who with the help of Edmund Prys and Gabriel Goodman translated the entire Bible into Welsh for 10 years. The original Bible is on display at the cathedral, along with later revisions. 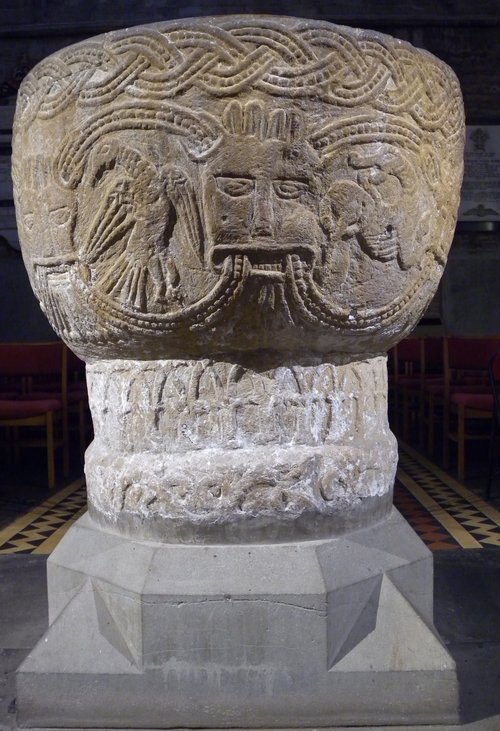 The cathedral is home to the largest Norman font in Wales. Dating from around 1190, it is thought to be late Norman or ‘transitional’ as it has Gothic pointed arches around its stem. It is of a lighter stone than the sandstone of the walls, and it must at some point have been hidden underground as the carvings on the west side have worn away. The grotesque symbolic carvings – a tree of life, a scorpion, an eagle, a fish and three green men – survive, appearing more Celtic than Norman. The carvings on the bowl are in the early Norman style. The column on which the basin rests, for its part, has intertwined arches characteristic of the late Norman period. The font is still used today.

The medieval shrine of St David is a rare survival from the days of pilgrimage. It housed recently discovered bones, claimed as those of David, lost during Viking raids. Some remnants of the extensive original paintwork are still visible. Despoiled during the Reformation, with relics removed and pilgrimage banned, the sanctuary still remained at the heart of the cathedral and was partially restored in 2012. A pilgrim prayer service is held at the sanctuary every Friday at noon and is now broadcast live with a regular global audience.

The Christ Mostyn, a rare, devotional, bound rood, is a realistic, life-size, seated figure of Christ with the emblems of the Crucifixion. It arrived at the cathedral in the 1950s, on permanent loan from Lord Mostyn, whose ancestors had placed the sculpture atop the minstrel’s screen at Gloddaeth Hall. It was carved – probably in Wales (although some have seen influences from northern France) and probably in the mid-15th century – from a single piece of oak, the back gouged out. It is now one of the few pre-Reformation Welsh wooden sculptures of its class.

This painting was one of Dante Gabriel Rossetti’s first major commissions. He chooses as subject the Nativity of Christ. The title emphasizes the descent of Christ from David, who is represented on the two panels of the triptych: on the left as a shepherd and on the right as a king. The central panel shows that Christ can be worshiped by rich and poor, shepherd and king, while a shepherd’s crook and crown are laid at his feet. The Christ child stretches out his hand to be kissed by a poor shepherd and his foot by a king, showing the superiority of poverty over wealth. 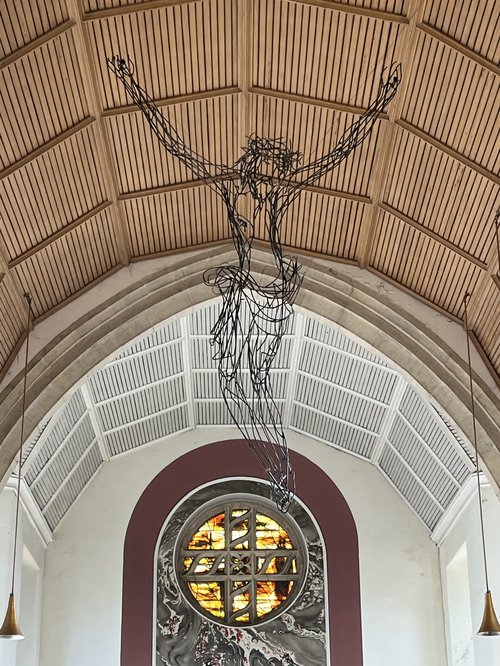 Newport Rood is the newest of the cathedral treasures. It was installed at the end of the first Covid-19 lockdown in 2020 and hangs over the entrance to the chancel arch. This remarkable work of modern art by Singaporean artist Tay Swee Siong is made of wire; it hangs near where the medieval rood screen would have been, adjacent to the door to the high-level rood screen. The appearance of the work depends on the position of the viewer. From certain positions it almost blends into the background and becomes invisible. When the sunlight shines from the south, it can look radiant. With the rooftops as a backdrop, it is prominent and full, suspended in the heart of the cathedral.