Welcome to Times Will Tell, The Times of Israel’s weekly podcast.

This week, before Easter, we visit the Church of the Holy Sepulcher in the Old City of Jerusalem with renowned archaeologist Professor Jodi Magness.

Christian tradition holds that Jesus was crucified and buried on the site of the Church of the Holy Sepulchre. But does archeology confirm this?

Magness is Keenan Professor Emeritus at the University of North Carolina at Chapel Hill. She is a classical and biblical archaeologist specializing in the Holy Land from the time of Jesus until the 10th century, and leads the ongoing excavation of the richly decorated Galilee Synagogue in Huqoq.

Magness has just completed a forthcoming book on Jerusalem through the ages, from the time of the Jebusites to the reign of Charlemagne, and has generously agreed to guide us on Holy Week Monday.

Touring the church and surrounding area, we see parts of the ruins of the early stages of the church, including a presumably Christian find that predates Constantine’s construction around 330 CE, as well as remnants of structures previous. At the end of the tour, we see what Magness thinks is the best evidence that supports the Christian tradition, although nothing is unambiguous.

“Many scholars believe that the Church of the Holy Sepulcher is probably the authentic place where Jesus was crucified and buried because the tradition is so old. But you still have that 300 year gap, which is an act of faith that archeology cannot cross,” says Magness.

Before the visit, Magness gives some background on the impetus behind the initial construction of the Church of the Holy Sepulcher there, as opposed to the Temple Mount, which until then had been Jerusalem’s center of gravity.

“For example, we have early Christian sources that spoke of Golgotha, the rocky outcrop where Jesus was crucified, that it was Mount Moriah, that it was the place where Abraham offered his son as a sacrifice, not the Temple Mount. “says Magness. 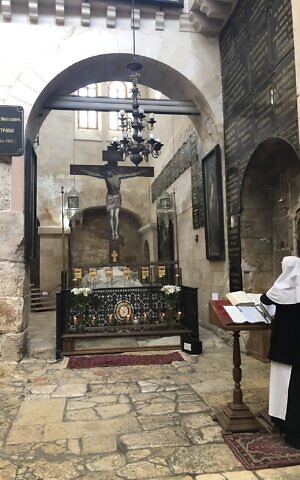 A nun praying in the Alexander Nevsky Church, adjacent to the Church of the Holy Sepulchre, on April 11, 2022. (Amanda Borschel-Dan/The Times of Israel)

We start our podcast tour at the Alexander Nevsky Church, also called the Russian Alexander Hospice, which is located east of the Church of the Holy Sepulchre. (For much of our time in this church, we stand next to praying pilgrims, so to respect them, sometimes we almost whisper.)

The land for the church was purchased by the Russian Orthodox Church after the Crimean War in 1859. Prior to the new construction, a well-known architect/archaeologist named Conrad Schick inspected the ruins – including Herodian-style stones – and claimed he had found part of the second ancient city wall, through which Jesus is depicted walking before his crucifixion in the New Testament. (Modern research does not support this identification, but many Christians revere the location.)

After Jerusalem was destroyed in 70 CE, Magness explains, the city lay in ruins until Hadrian rebuilt it as Aelia Capitolina in 129/130 CE. The original site of the Constantine-era Holy Sepulcher was a converted pagan temple built by Hadrian. Inside the Alexander Nevsky Church, Magness points out some in situ columns from Hadrian’s Jerusalem, as well as redeveloped ruins from the Second Temple period. 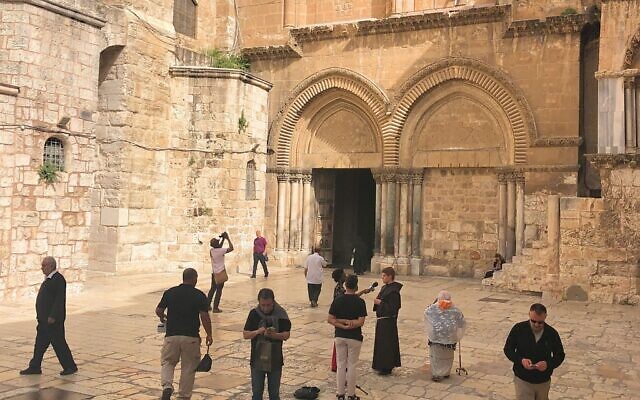 Crusader-era facade of the Church of the Holy Sepulcher in Jerusalem’s Old City, April 11, 2022. (Amanda Borschel-Dan/The Times of Israel)

We enter the Crusader-era facade of the Church of the Holy Sepulcher and among the sections we visit is the Armenian Chapel dedicated to Saint Vartan, which is reached by descending some stairs. The chapel, explains Magness, was originally a quarry, dating back thousands of years, as well as the original construction of the church in 330 CE.

According to a well-known later tradition, this is where Saint Helena, Constantine’s mother, found the remains of the true cross, which is why Constantine came and built the Church of the Holy Sepulcher here, Magness explains. .

Magness describes ship graffiti and a Latin language inscription that were discovered in plaster inside a quarry chamber next to the chapel, which is potentially evidence that one of the original builders was already a Christian.

“What we have here, apparently, is evidence of a very ancient Christian pilgrimage to this place even before the Church of Constantine was built,” Magness said. 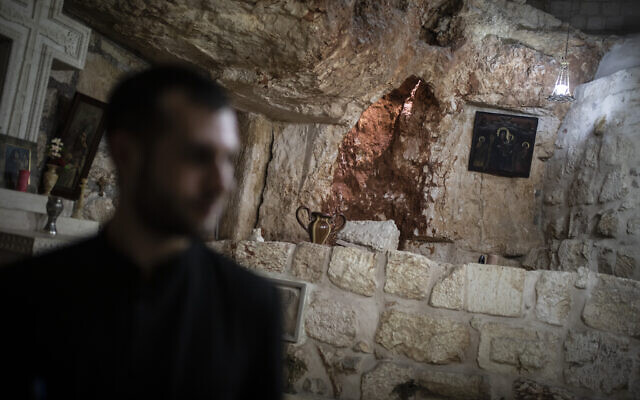 The ‘Chapel of Vartan (or Vardan) Mamikonian’ under the Church of the Holy Sepulchre. (Hadas Parush/Flash90)

The final stop on our tour is a small Syrian Orthodox chapel next to the main rotunda hall.

“It’s a very sad and neglected chapel,” Magness said. “But what’s so interesting is that opening up this chapel, you can see there’s an opening in the wall that leads to an area outside the church walls.”

As we crouch inside this opening, we see a pair of Second Temple Jewish locula, or graves.

“Now that means it was a Jewish cemetery,” Magness said. “This is apparently part of the cemetery that Constantine cut down when he built the church. And these were left because they are outside the walls of the Church. 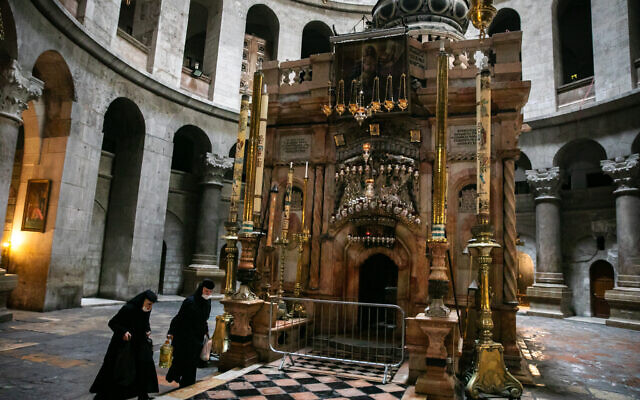 Visitors visit the Church of the Holy Sepulcher in the Old City of Jerusalem, March 10, 2021. (Olivier Fitoussi/Flash90)

Times Will Tell podcasts are available for download on iTunes, TuneIn, Pocket Casts, Stitcher, PlayerFM or wherever you get your podcasts.

Check out this previous episode of Times Will Tell:

We tell a critical story

Israel is now a much bigger player on the world stage than its size suggests. As a diplomatic correspondent for The Times of Israel, I am well aware that Israel’s security, strategy and national interests are always under scrutiny and have serious implications.

It takes poise, determination, and knowledge to accurately convey the story of Israel, and I come to work every day aiming to do just that.

Financial support from readers like you allows me to travel to witness both the war (I have just returned from a report in Ukraine) and the signing of historic agreements. And it keeps The Times of Israel the place readers around the world turn to for accurate information about Israel’s relationship with the world.

If it’s important to you that independent, factual coverage of Israel’s role in the world exists and thrives, I urge you to support our work. Will you join the Times of Israel community today?